Haley decided to start her "anniversary" off with a BANG!  Fourteen seizures this morning.  She had extra medication before bed and two magnet swipes on her VNS to help her get through the night.  Starting at almost 1:00AM she began to seize.  The seizures lasted between 30 seconds to 3 minutes.  Bobby gave her Diastat (20mg) after she experienced five seizures around 5:00AM. She had five more seizures and at 6:30AM, I had to give her a intramuscular injection of Midazolam.  She still had four more seizrues before waking up.  She has not gotten out of bed yet, she is just napping on and off.

Dravet syndrome to me is the 'schizophrenia' of epilepsy.  It is forever mutating in how it presents itself, changing seizure types regularly.  Then the medications that used help become ineffective and perhaps the ones that did not work before might now work.  I often wonder if it would be best to put all her meds on a lazy susan and spin for the daily dose of pharmaceuticals.  I often worry about the damage that the long term use of benzodiazepams are on her body.  We know that Depakote use is hard on her liver and she has elevated enzymes...but nothing abnormal for someone on Depakote.

This all brings me to the new fight we are beginning.  It started last week with a trip into Richmond to join a lobbying group  for Medical Cannabis headed by Safe Access Virginia.  To be honest it actually happened the day before the election last November....Haley and I "accidentally" ran into the democratic candidates for Governor, Lt. Governor and Attorney General on our way home from a neurology appointment.  We pulled in to a strip mall with a Five Guys for lunch and looked up and saw U.S. Senator Mark Warner and Terry McAuliffe go into a store front.  Haley and I followed, hoping to see Dr. Northam, Lt. Governor candidate and Haley's first neurologist.  We basically "crashed" a pep rally.  Afterwards we got to speak to Dr. Northam.  I went to talk to him about Lancaster County's schools and HE brought up the subject of Medical Cannabis saying, "Lisa, you know about Medical Marijuana for kids like Haley...(head nod on my part)...I'm going to push for it".  I then inqured if his cell phone was the same... 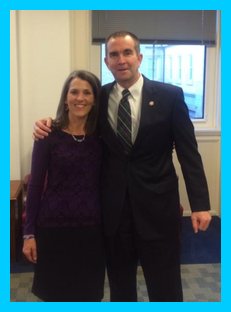 On Monday, January 20, 2013, I with other members of Safe Access Virginia,  headed to the General Assembly Building to meet with our delegates and senators.  We also were there to oppose a bill brought forth by Delegate Robert Marshall.  The Honorable Delegate Marshall wanted to remove the part of Viriginia Code that allows for a doctor to write a prescription for medical marijuana for glaucoma and cancer.  You may say, Virginia has a law that permits that??  Then why are you fighting for it??  It is there, but it is flawed and ineffective.  You see, the prescription pad that the doctor would write the prescription on is regulated by the DEA and federal law prohibits the use of medical marijuana.  We need new legislation that would allow a doctor with a long standing relationship with his patient make a "recommendation" for medical cannabis and we also need to expand upon the conditions it  would be available for.  We did get to meet with Dr. Northam and many members of the House and Senate.

We are now trying to educate the legislature on what Medical Cannibis can be.  For Haley it would have little to no THC, the psychoactive component.  She would not be able to "get high" or have to smoke it.  It would be in a capsule or 'gel' or be edible.  Because it does not give the "high" it has little chance to become addictive or abused recreationally.  How does it work?  They really do not know, but that is the same response we get when we ask how some of her anti-seizure medications work.  Cannabis is a neuroprotectant and anti-inflammatory.  It was widely used in medications up until 1937.  We will continue to fight and hopefully the Commonwealth of Virginia will follow the lead of other states that are looking into legislation to give kids like Haley a fighting chance at life!