Prior to Haley's birth, my medical experiences were limited. My family was military and I have only have a handful of memories of going to the doctor. Two of those involved stitches about a decade apart, and beyond severe cases of poison ivy, I rarely went to the doctor. However, with Miss Haley and then her brothers in my life, I am finding I am reluctantly persuing a "Mommy Medical Degree".

Of course it all started with Haley's uneventful birth and successive pediatrician visits that all new moms go through. However, after Haley turned five months we ventured into the field of emergency medicine. It was a baptism by fire, with Haley having her first seizure and every test run, with the exception of a spinal tap (thankfully I asked my pediatrician her "mom's" opinion on that one!)  If you have read any of this website you know we became quite experienced in emergency medicine.  I am not proud to say, but all three of my children have been in the ER before they turned six months.  With the frequent visits, I got very comfortable in the emergency room.   I even got so bold that once when I was in the ER with Haley during the Ketogenic Diet years, I responded quite harshly to a doctor.  After the attending physician went over "why" were in the ER that night, she said, "you know, there is NOTHING we can do for your daughter...".  I immediately responded, "Oh, yes there is, YOU WILL give her something to stop these seizures OR I WILL take her home and eventually overdose her and be right back up here!!"  A few moments later that doctor came back in to apologize.  She told me, "My nurses said that I was rude to you, but it is just that you know more than we do about this..." So I guess I can say that was the first time my medical prowness was acknowledged.

When Haley was about five and could not attend school because her seizures were so severe and frequent, I would joke that instead of Kindergarten, Haley was "pre-med" and using the "hands on" method to learn about all fields. After all by the time Haley was three she had already visited the Pediatrician, the Neurologist for seizures, the Urologist for frequent UTI's (both boys later received care from the same Urologist), the Otolaryngologist for tubes, the Orthopedist for a broken arm, and she accompanied me to the gynecologist and perinatologist during my pregnancy with the twins. Once the twins were born she did a rotation in neonatology and got to have a quickie visit to the NICU and progressive care nurseries.

Right after Haley turned three, we ventured to Johns Hopkins to study medical diets alternatives to pharmacology in the treatment of seizures. If that was not enough during that year, we also discovered that Haley's ear tubes had worked their way out of her eardrum and lodged themselves in her ear canal. This caused a 30% hole in her left ear and a 60% hole in her right ear. This was quite against the odds, but most everything with Haley thus far in her life has been against the odds. It also indicated much further study into the field of otolaryngology. This included a sleep study, removal of tonsils and adenoids, and eventually tympanoplasties (patching up the eardrum with a skin graft) in both ears at separate times.  After each surgery she looked like a wrestler with only one ear guard on.  Of course because of this unique situation, we were sent into the field of audiology.  During several hearing tests we discovered that if Haley senses that you are the least bit uncomfortable with working with her OR if you can not engage her in an audiology exam she WILL NOT participate. She will either insist on coloring OR continually yank on her earphones and not respond to questions. If those two avoidance techniques do not work, she will try to “free” all the animals out of their plexi-glass cases.

By six Haley was introduced to the world of therapies. Through the public school system, Haley was found to be eligible for Speech therapy, Occupational therapy and Physical therapy. She received these services on a weekly basis in the school or in our home. We also paid for additional therapies outside of school through children's hospitals.  We even enrolled Haley into therapeutic horseback riding.  I would have to say that was one of our best decisions in the therapy fields.  It helped so much to straighten out  a curvature in her spine.

If we fast forward to eight, she had received the diagnosis of Dravet after two visits to the Epilepsy Monitoring Unit (EMU) for 48-hour stays. We spent time with the geneticist to discuss her “di-novo” and unique mutation that indicated Dravet syndrome was her diagnosis. She had a visit to the cardiologist because mutations in the sodium channel gene can also affect the heart as well as the brain. This was the year we also decided to revisit the field of orthopedics. Individuals with Dravet syndrome tend to have flat feet to start with and then over time the way they walk becomes a more “crouched gait”. Their feet pronate (turn inwards), the knees come together and their hips shift back. We were beginning to see this in Haley by the time she was eight. The first orthopedist dismissed all of my concerns and I kid you not, he rolled his eyes at me when I explained her high pain tolerance. Needless to say we did not return to his office, but sought out two more opinions before settling in with an orthopedist.  I wish I had a video of Haley jumping up and down with three broken bones in her foot to show the first orthopedist.  These kids with Dravet have an extreme tolerance to pain. In 2011 Haley did have the surgery on her feet.  In this surgery she had cadaver bone implanted in both ankles to create an arch and more stability in her gait.

So here were are at eleven and I am thinking we have pretty much covered most of the medical world, with the exception of gerontology…of course all of this is quickly moving me in that direction! What else could we explore?? So at the beginning of February, Haley decided to enter into the field of Dentistry. She tripped over pillows on the way back to bed after a bathroom visit. Against all odds she hit ONLY one of her front permanent teeth and pushed it completely up into the gum! She also had to get a stitch in her lip. This all propelled me into the study of dentistry.

So Haley once again is now providing a “teaching” experience for all involved. I have learned that if Haley was younger, say eight-ish, then “no worries” the tooth’s root has not completely closed and the root is what drives the tooth down into place, so the tooth will re-erupt. If she was older, say 13-ish, “no worries” she would definitely need to have a root canal. So Haley once again is in the “gray area”. As her dentist says, “There really are not that many studies done on this type of thing. No one voluntarily wants to have their tooth pushed back up into the gum”. Isn’t that odd?? LOL!

So after the initial injury, we played the wait and see game for a week and nothing happened. Then we were directed to the orthodontist by the dentist.  The orthodontist who said, “I know what I want to do, but I cannot get a bracket on that tooth, maybe the endodontist can while he performs her root canal.” Then it was time for a game of phone tag. The dentist called the endodontist who did not want to see Haley and perform the root canal until the tooth was down further. Then the dentist called the oral surgeon to find out what he would do and then the dentist called me with the appointment.

Last week we went to the oral surgeon and finally got a game plan. On February 28th, the oral surgeon will cut Haley’s gum and place a bracket with an 18kt gold chain on it (she is going to look good!). After that I will take a “drugged” Haley up the road a couple of blocks to the orthodontist who will put on more brackets and we will finally begin to bring the tooth back down. Thankfully all these guys know each other and are working together! I feel the love! So once this is all in place Haley will have to have a root canal. The worry is that the body will reabsorb the root if it left up there. Who knew? They say that many adults find on an dental x-ray that their tooth suddenly has no root and then need a root canal. It all can be traced back to a trauma from when they were a child.  Such insight I am receiving!!

I am really learning way more than I ever thought about the medical field. So in light of all of this, I have created a shirt. I have frequently remarked that I am a “Dravet M.D.”, a Dravet Mommy Doctor. I think most of us with kids with Dravet or any rare syndrome or disease do become the experts in the field. You can check out my Café Press store where I have the Dravet M.D. t-shirts for sale along with other items. All proceeds will go towards Haley’s Research Fund that is held by Dravet.org.

Along with a Dravet M.D., I am quickly learning more than I wanted about Special Ed Law...So I might also have a Dravet J.D. before all of this is through... 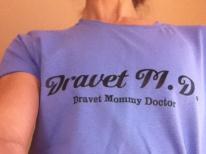