Here I am on the 13th anniversary of Haley's first seizure and looking back not only over the 13 years, but the last year. 2013 by far was the worst seizure control we have experienced with Haley. The difficulties were further compounded by difficulties with the VNS and then a host of school issues.

The year started off with four hospitalizations in two months. All hospitalizations required an ambulance ride from our local hospital to VCU/MCV in Richmond. Haley loved that, even though she was “unconscious” on the rides… The first, third and fourth were due to clusters of seizures that would not stop. We would administer our “rescue drugs” (Diastat, Lorazepam, or extra daily meds) and she would still seize. The second hospitalization was due to flu and pneumonia and she had the shot!! Amazingly with the flu and pneumonia and high fever she never had a visible seizure! 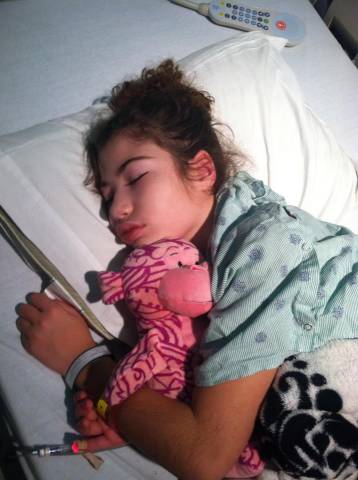 During these hospitalizations we tried adding Verapmil to her cocktail of drugs, but after a couple of months of taking it we saw no benefit. It was after the third hospitalization that we were given a new “rescue” drug to try, Midazolam or Versed. Many Dravet families had been using this as an alternative to Diastat. The majority of them gave it to their children intranasally. Dr. Pellock has been consistent on one issue of medication and that is to “know that the amount given was given”. He feels that if we were to give the medication intranasally we could not be sure that all the medication was administered. We were prescribed to give it intramuscularly. So I learned how to do that on an orange…

The next round of seizures we tried our Midazolam and then went immediately to the ER. We wanted to make sure she did not experience any negative side effects of the drug which could include respiratory distress. We arrived and within 45 minutes she had another seizure, the ER doctor administered 4mg Ativan. Thirty minutes later she had another and another 4mg of Ativan. The ambulance was called and then one more seizure and one more dose of Ativan before we left for VCU/MCV. Upon arriving at MCV she had more seizures. That was the beginning that set the tone for the rest of the year. 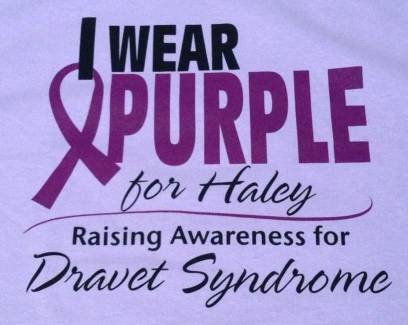 We felt the love of many in March when we celebrated “Purple Day for Epilepsy”. We were touched by the many, many friends and family that wore purple to support Haley. We are so blessed by our community! We continued to raise Epilepsy Awareness in April at the Annual National Walk for Epilepsy.

In April we decided to take the next step in seizure control. We scheduled surgery for a Vagus Nerve Stimulator (VNS). We had the surgery on May 29, 2013 and all went well. We felt we had improved seizure control. We went to our follow-up with the surgeon, Dr. Tye (he is an amazing surgeon and very caring!) and everything looked good…he said see you in about three years.

However, we were back in his office in early July. Haley’s incisions looked red and inflamed and the one under her arm had not healed all the way. We initially thought it was an allergic reaction to the sutures. This was the timeframe for them to be dissolving internally. Haley was put on an anti-biotic and we thought that was that. Then two weeks later the incisions ruptured open. We went in for an office appointment and ended up staying the night and having surgery the first thing in the morning. It was quite a surprise for all of us. We had house guests at home, British Soccer/Football Coaches, but fortunately for me they had planned on cooking for us that night. The surgery we well, they washed her out and they stitched her up with non-dissolvable stitches. We removed the stitches in the appropriate time period. Things looked good. We thought it was all behind us…and they ruptured again. We went back in the hospital and the plastic surgeon tried to use Silver to heal it all. We went home with “silver pads” on the wounds, but they would not heal. So on August 8, 2013 we went back into surgery to clean the wounds out again. Unfortunately when they opened Haley up they found so much infection they had to rip (carefully) the device and all the leads completely out. It was suggested she might be allergic to the silicone on the device. We prayed they would find another reason. After two days in the PICU it was found out to be a staph infection and we went home on hard core antibiotics. 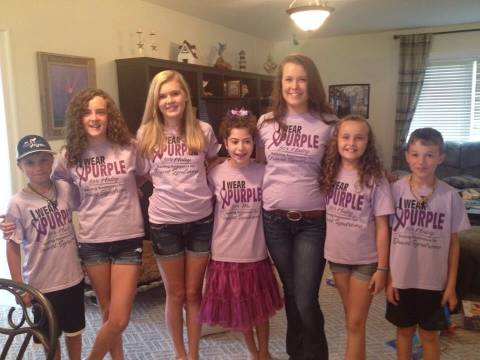 In August we had another wonderful expression of community love. We hosted the First Annual (hopefully) Haley’s Beach Birthday Bash at Willaby’s Restaurant. The turnout was amazing despite the weather..which was gray, rainy and cold. We had three bands play: James Justin, Spreading Joy and Legacy. It truly was an amazing event. My nieces all came to help support Haley and we raised over $7000 for the Dravet Syndrome Foundation. The money went to buy durable medical products for families that have to deal with Dravet syndrome. We hope to do it again, as many people responded so positive to the entire event.

In the meantime, we had found out that Lancaster County Schools were only going to have two nurses for three schools. In my opinion and the opinion of Haley’s medical team, Haley could not attend school without a full time nurse. I let the Director of Special Education know and nothing was done. I spoke at the School Board meeting and nothing was done. I requested a Homebound form to be signed by her neurologist and submitted it to the school before the start of school. I informed her program director of the issue and we planned to meet the third week of school, since the first week was too busy for her and the second week our family was on vacation. Long story short, legal teams had to get involved, followed by a formal complaint to the VA DOE. Presently as I write this, I am waiting for a resolution to the whole thing. In the school’s response to my complaint they make me to be the one at fault for not explicitly asking for accommodations to be made in her IEP and a few other allegations that are not factually true. It is hard to send Haley back into that environment after seeing the “true colors” of those involved in her education. I know no one wants to be blamed for something that has happened, but open discussion of the whole situation would have prevented the escalation of the problem. Stay tuned…

The month of September was a very difficult month despite the school issues. Haley had over 100 seizures in the month. It was decided right away that the VNS needed to go back in. On October 3, 2013 it was re-implanted. We saw immediate results. Four days without seizures!! We cheered, but that was the only “long” (it’s all relative) break we got from the seizures.

She ended the year with a total of 750 seizures that is more than double what she did in 2012. I partially blame puberty…I won’t discuss that here… I tried to figure out by looking at her seizure calendar how many days she had “seizure free”. I could only count 157 days where nothing was recorded. I do know there are days where I forgot to record data, so it might be fewer. All I know I am glad 2013 is behind us…on to 2014!!

Despite all Haley goes through, she is amazingly strong. Her spirit is so resilient and I learn so much from her. She has shown me what passion for a cause is. I will continue to fight for her and others like her. Whether it is fighting for other children receiving Special Education services or other families dealing with Dravet syndrome or other with intractable seizure disorders, I will persevere as Haley has taught me…after all she is MY hero! 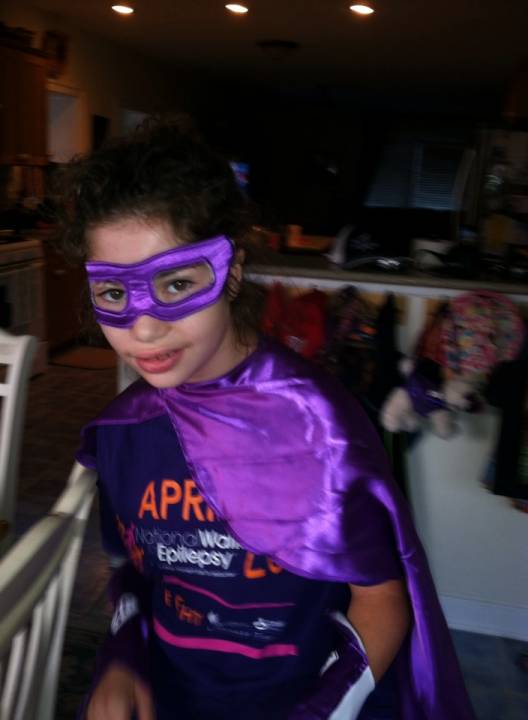