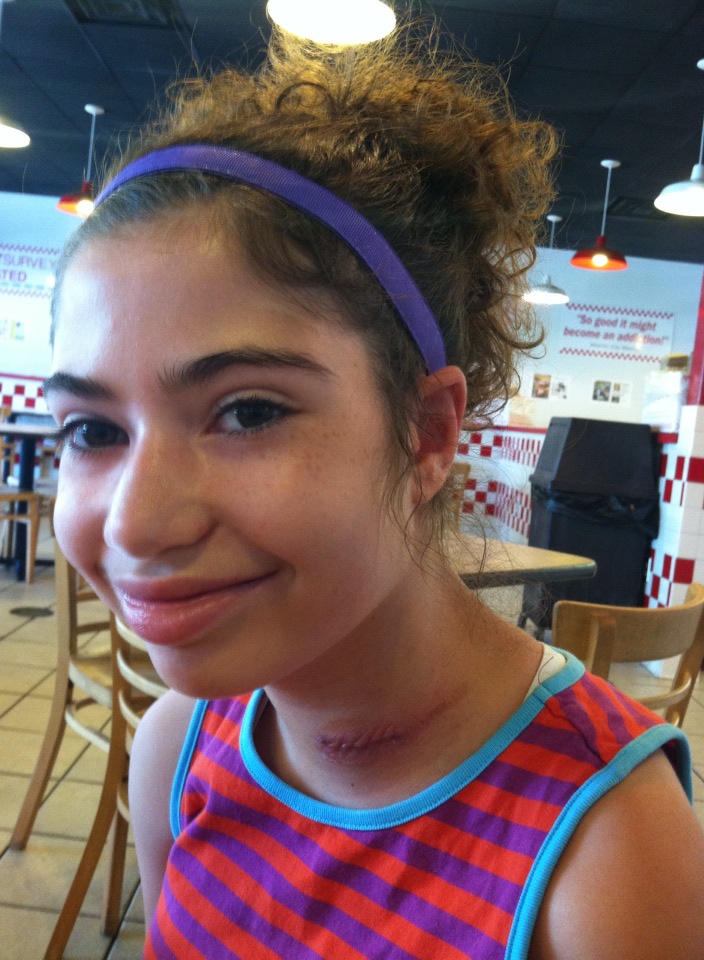 Although we have known about the Vagus Nerve Stimulator since Haley was about five-years-old, we delayed trying it.  Partly because our neurologist is considered the "pharmacological guru of pediatric epilepsy" and partly because we always looked at it as a "last resort or last line of defense".  The decision to go forward with the decision was particularly hard for Haley's dad.  I believe because he viewed it as the "last option" for Haley.  And quite honestly, he is right.  There is nothing new in the works on the horizon for those with Dravet syndrome (However, medical marijuana is gaining in popularity, but not accepted widely).  As the protector of the family, Bobby kept hope that there would be something coming down the pike.

This year has been a particularly hard year for Haley.  Haley was hospitalized four times in January and February, three times for clusters of seizures and once for pneumonia and the flu.  She did get the flu shot, but it was our understanding even with the shot you had a 60% chance of contracting the flu virus.  For twelve years we escaped it!!  The clusters of seizures took mega amounts of drugs to slow down.  Once we were transported to VCU Medical Center after she had been given 2 x 20 mg Diazepam and 5 mg Midazolam at home, plus 12 mg of Ativan at the emergency room of our local hospital.  That combination would put several adults on their behinds!  During one ICU stay we spoke with Dr. Gary Tye about the VNS.  It was where I wanted to go immediately, like that day!!  However, we ended up trying Verapamil for a short while.  There were no "remarkable" changes with Verapamil on board and she stayed on it for three months.

In late April we had an appointment with Haley's neurologist.  We went over what options were left for Haley to try.  She was having over 80 seizures a month by this point.  It was a pleasant visit and right before we left I asked our doctor, "About the VNS...If you were her dad when would you think about it???"  His response was very brief and with a slight smile he said, "I would have already had it".  Lesson learned a doctor's medical opinion is not always their parental opinion, it is nice to have both!!

Needless to say, talking Daddy into the surgery was easier with the doctor on board.  I was amazed how quickly they got Haley in for surgery.  I think it was two weeks after I made the initial call.  Haley did wonderfully during surgery and absolutely loved being in the hospital.  She had two incisions made, one in her neck for the "lead" or wire and then one near her armpit in the axillary region for the "generator".  The device was not turned on immediately because she had some extra trauma to her neck during the procedure.

The device was turned on June 3rd.  Another funny insurance issue that makes you shake your head.  As our neurologist was about the activate the device, a knock was heard at the door.  One of the neuro-team assistants was there and she asked, "Is Haley a candidate for surgery??  I have the insurance company on the phone and before they will permit the device to be turned on, they need that question answered."  I was just dumbfounded.  The insurance company approved the device to be implanted, but did not foresee that it would be turned on???  Fortunately that matter was taken care of quickly and she was activated.  So far so good.

We are now in a wait and see mode.  The device is operating at a low level.  We do notice an increase in energy level and less napping during the day.  She has been very "industrious" which has made Mom a little more stressed.  Having a nearly 5-foot tall "toddler" is a little challenging!!