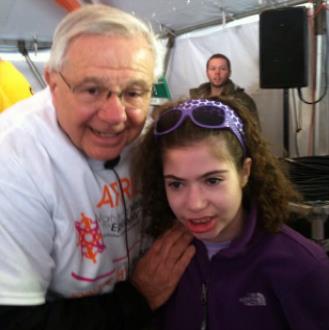 Thank you Obamacare! The "Affordable Healthcare Act" has now made seeing Haley's Pediatric Neurologist/Epileptologist harder to get an appointment, more expensive, AND less convenient. After 25 years of using a satellite office in the Child Development Resource Center in Williamsburg, Haley's doctor will no longer be able to see patients closer to their homes or allow patients easier to access his very busy schedule. Why??? Because it is NOT a medical center...there are not enough nurses on staff...Now I have to drive to Richmond (which is not really a big deal). Pay for parking and pray they do not damage my vehicle (which was done one of the times we used their valet parking~valet parking is a must in order to get Haley safely in the building in a timely fashion), and wait FIVE months to be seen when the doctor said he would like to see her in 3-4 months!!

All that echos in my head is what the attending neurologist said on one of Haley's hospitalizations...the chronically ill will feel the brunt of Obamacare the most. His son has Juvenile Diabetes and he shared the story that his son's has an insulin pump and in the past the "regulator" was no separate charge.  Now he is being charged for the regulator, saying it was always "complimentary" in the past.  I am not familiar with a regulator on an insulin pump, but on an oxygen tank it is integral to dispensing the appropriate amount of oxygen to Haley.  I am guessing it has a similar relation.  How is that "complimentary" and seen as a bonus, is something that they now have to pay for additional for?  It was then the nuerologist said we are the ones that will feel the pain.

I don't think that all who voted for him thought that this would affect us this way. I had someone ask me if I was happy with Obamacare when it first passed, they really did not ask, they just said, I bet your happy with... I said "No, because if we were back when Haley first was starting this journey of uncontrolled seizure, we would have NEVER been able to see the five neurologists before we got an answer to her issue. We would have been stopped after one and said, "She has intractable epilepsy, get over it!" Her neurologist's hands are tied now...it so sad, he really would like to reach out and service an area that has no pediatric neurological care...so sad.  The number of pediatric neurologist is rare, a pediatric epileptologist should be on the "endangered species list".  Here is a man who is willing to serve the underserved and now he is told he cannot in the fashion he has done in the last 25 years!

We are personally watching our private insurance sky rocket.  Since I am unable to work with the uncertainity of Haley's health and now because I have taken on homeschooling my twin boys, my husband is the sole bread winner as a self-employed builder.  We pay out of pocket on an individually held policy that has been very good to us.  But how do we cover the escalating cost of our healthcare?  Just like the other large companies, the costs will be passed onto the consumer. Get ready to see everything jump in price!  How can the small business survive?

Fortuantely Haley is also covered by a Disability waiver in addition to her private insurance, and that helps us cover the costs of her medical care.  Prior to the waiver, we were hitting our drug cap ($5000) every June which caused us to pay out of pocket for all her medicines.  I'll never forget when I went to the pharmacy to pick up four syringes of Diastat (rectal valium), the rescue drug that kept her out of the emergency room.  At the time it was not unusual for us to use 10-12 of them a month.  At that time the four 10mg syringes cost over $770!!  It has since gone up. The cost of the medicine inside??  EIGHT CENTS!!!  What needs reform???  Shouldn't we look at the pharmaceutical companies.  Now the government is talking about caps of the what they will pay for disabilities.  What will we do to cover our costs??  Especially if Haley has another year like this last one, being hospitalized four times in two months!  The ARC posted the following in their "Capitol Insider" newletter/email:

"The plan calls for placing four separate capped spending amounts on each of four major groups: the aged, people who are blind and people with disabilities, children, and adults. The number of individuals in a group would be multiplied by the cap amount for that group resulting in the amount of federal dollars the state would receive for each person in that group. The cap for each group would be based on what a state currently spends on that group. Annual increases to the per capita caps would be based on “a realistic exogenous and appropriate growth factor for each state.” States that currently spend more on each person would be less than increases to states that currently spend less on each person until spending were “normalized” across states. If state spending exceeded the caps, there would be no additional federal dollars."

Notice they are going to multiply the number of individuals in a group...well, my daughter has a rare disease!!!  There will be less money allocated to help those with rare syndromes!!

It is only just beginning, I have heard other stories from other Dravet families where medications may not be covered any more, waiting to call in two months in advance for an appointment and if there are no slots, you have to call back the next month, and not being able to see their practioner anymore.  Our pediatrician stated that many in the medical field will probably retire early which truly will be a shame for the pediatric epilepsy crowd.  With this scenario, does it encourage people to persue a career in the medical field.  Goes to show you that some ideas might look good on paper, but in reality they do not work. However, in the Obamacare situation...I would like to know who truly read it!!!